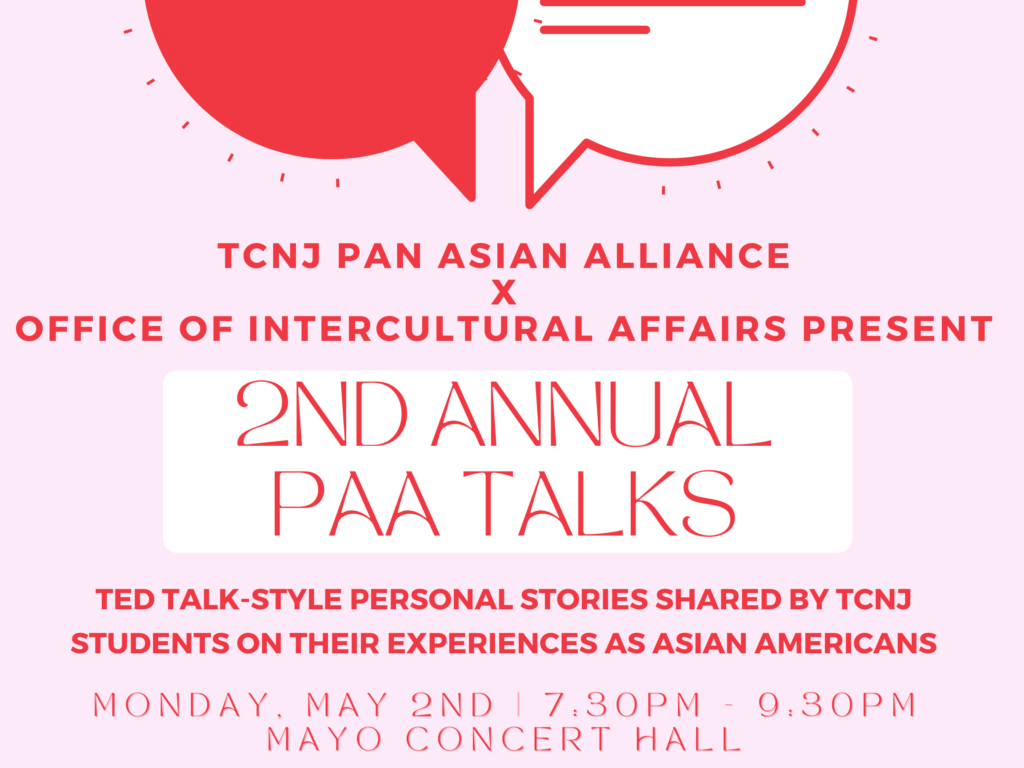 PAA Talks is a TED-style Talk on AAPI (Asian American and Pacific Islander) experiences by TCNJ’s AAPI community (PAA) members. This event is run entirely by students with two co-chairs, Gabbi Son and Brandon Hoang, and a committee of students, Kyla Ramos, Neerjah Upreti, and Christopher Cerny. With this year being the first year that PAA (Pan Asian Alliance) decided to team up with TCNJ’s Intercultural Affairs team to make this event an even greater success.

PAA Talks is the creation of co-chair Gabbi Son, who after the shootings in Atlanta in 2021, felt she needed to use her voice and was scared for her own family. Gabbi always had the dream of giving a TED Talk one day but never had the courage to do so. After attending a talk with James Felton and Dr. Hu, Gabbi decided to start the process of forming PAA Talks. Understanding the stereotypes around Asian-identifying people in the United States helped Gabbi create the name of the event. This event was always meant to be a safe space for the speakers to discuss what their experiences were/are as an Asian-identifying person at The College of New Jersey.

The structure of PAA Talks is unique because there is a dialogue after the talks unlike TED Talks. During this time, audience members can share reactions and ask questions on each talk. The dialogue is moderated with discussion guidelines to create a safe space and speakers reserve the right to decline any question that overstep their boundaries. The structure makes the event fit within its two hour time frame and allows audience members to really interact with each of the speakers and not make it seem like they are being lectured to.

This year’s event will feature some amazing speakers: Lily Drennan, Allen Hong, Kelly Jung, Hafsah Shaik, and Noverah Adeen. They have been preparing for almost two months and will be speaking on a diverse array of topics that define their Asian American experience. Also, this year features the new addition of committee members: Kyla, Neerjah, and Christopher. All of them have varying levels of knowledge/activity within PAA and hope to continue PAA Talks as a legacy event for years to come after shadowing this year. The committee additionally helps speakers with their talks, aids in the planning process, and provides the co-chairs (Gabbi and Brandon) information on how to improve the event overall.

Some of the students involved in the event answered some questions about how the experience around PAA Talks has been over the past three weeks. Co-chair Brandon Hoang (Student, Psychology, Class of 2022) said of the experience this year, “In truth, the previous year’s event was organized as more of a reactionary measure after the Atlanta spa shootings. However, out of that tragedy, we were able to create an enduring platform where students can build on the previous iteration of the event by being very intentional and forward-thinking in our planning. Additionally, speakers were a lot more independent in their preparation for their talks, as opposed to now where we are actively coaching and meeting with them. Overall, with increased funding and structure, our hope is for this year’s PAA Talks to be even bigger in its scope and message of amplifying AAPI voices at TCNJ!”

A couple of the speakers were also interviewed for this blog and told a little about why they were speaking at PAA Talks 2022, “As my third year as a Chinese American on campus, I couldn’t help but feel compelled to represent my culture, which is a large fraction of me and my identity, but such a small fraction on TCNJ’s campus. I am also a part of TCNJ’s AAPI Advocacy team and wanted to extend my outreach by speaking at PAA Talks” (Kelly Jung, Student, Communication Studies, Class of 2023). Another speaker said that last year’s event was, “…incredibly eye-opening and inspiring. I am grateful I had the opportunity to hear such impactful talks… It was definitely an experience I will never forget” (Hafsah Shaik, Student, Psychology, Class of 2023). The speakers develop their speeches with the help of committee members and co-chairs at weekly meetings that aim to prepare them in different aspects of giving an effective talk, such as storytelling, flow, and delivery.

This year’s PAA Talks will be held at Mayo Concert Hall from 7:30pm to 9:30pm on Monday, May 2, 2022. Admission is free and open to all TCNJ students, faculty, staff, and administration.

Christopher Cerny is a junior marketing major who has been an active member of PAA since his sophomore year at TCNJ. He is very excited to be a part of the committee for this year’s PAA Talks after attending last year’s event. He is also the incoming treasurer for the Asian American Association for the 2022-23 school year.